You are here: Home / Archives for Olms

Croaking science is a new way for student volunteers and scientist to explore what’s occurring in the world of Science. Croaking Science looks at science facts, new research or old debates which are inspired by or affect amphibians and reptiles, and then communicates this in layman’s language to a wider audience. The aim of the feature is to provide a platform for those starting their foray into the world of science communications as well as established scientists. We welcome any submissions from students and scientists. Please note that the views expressed in the articles are not those of the Froglife Trust.

This week our Croaking Science reporter, Rhiannon Laubach, introduces us to the Olm one Europe’s most unusual amphibians.

The only cave dwelling vertebrate in Europe is an amphibian – a salamander known as an Olm (Proteus anguinus and it is various sub species). It is a neontenic salamander which means they do not metamorphose fully and retain some larval characteristics such as external gills and a tail fin. This rarity has a restricted range as it is completely aquatic and only found in areas of karst aquatic cave systems in limestone or dolomite rocks. They are found in the Dinaric Alps that stretch along the Adriatic Sea, from north-eastern Italy to Bosnia and Herzegovina.
The olm looks like an elongated salamander with thin legs, a long head, rounded snout and a flat tail. They are between 23 and 25cm in length with males being smaller then females. Their skin is whitish and translucent in colour, with a pink tinge due to the blood vessels being so close to the surface.

This species lives in total darkness so their eyes are very poorly developed and have regressed back into their heads. In one sub species they are completely covered over by skin. Interestingly, larvae’s eyes develop normally until they are about 4 months old when the development stops and the eyes start to atrophy. The olm’s have an area of light sensitive specialised cells called ‘melanophores’ on top of their head

To compensate for the lack of sight, the olm has other more acute senses that allow them to hunt in the dark. They have one on the best senses of smell of any amphibian. They can use their sense of smell and taste to locate very low levels of organic compounds in the water. They also have very specialised ears that can sense both vibrations from the ground and sound waves through the water. Unusually, olms have a lateral line which is common in many fish species. This is a pressure sensitivity system that can sense tiny water displacements. Olms also have sixth sense which is centred in a special sensor in their heads known as an ‘ampullary organ’ that enables them to detect weak electrical fields.

Olms feed on detritus washed into the caves as well as other endemic cave species such as crabs, snails and other insects. They swallow their prey whole. Olms can consume large amounts of food and store it as deposits of glycogen in their liver. When they can’t find food, they can use these deposits. Experiments have shown that Olms can survive up to 10 years without food.

Olms are a long lived species they have been recorded as having a life span of 58 years. There is anecdotal evidence they can live up to 100 years. They become sexually mature between the ages of 7 and 12. Females can lay up to 70 eggs hiding them under stones which she guards the eggs until they hatch.

Olms are difficult to study in the wild so most observations of their life history come from a sub-terraine CNRS laboratory in the French Pyrenees, where the olm has been studied since 1955.

It occupies an area of less than 2,000 square km and its habitat has become increasingly threatened. The Olm is threatened by over-collection in the wild, invasive species, pollution and improvements in agriculture causing an increased amount of chemical run off. 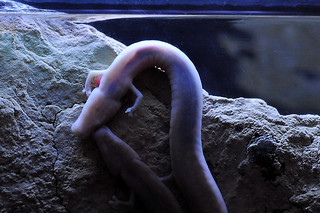 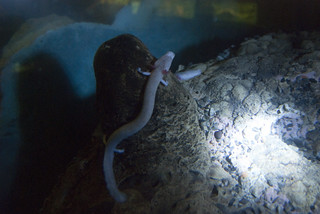